Here's a random idea.
Lots of times my students confuse fiction and nonfiction. I remember having my own problems with this as a child. We tell them, "fiction means Not real" and "nonfiction means real." Many students say they get them confused because of that silly little "N."
Try this: "Fiction means Fake" and "NonFiction means Not Fake." Now the N's AND the F's line up.
I've received positive responses from kids when they are first learning the two genres, and they often say, "I get it now." They also tend to learn the 2 types faster. Once they are confident in and understand the two types, and they begin to learn the genres within the categories, we redefine them to the "real" and "not real."
Posted by Unknown at 6:38 PM No comments:

Email ThisBlogThis!Share to TwitterShare to FacebookShare to Pinterest
Labels: Reading

Here is a poem I found about author's purpose. When we get back from break, this is the plan to study, so I found this poem. I like to give the kids poems because, in this case, it helps them learn about a subject, and it helps them to build fluency. Enjoy! 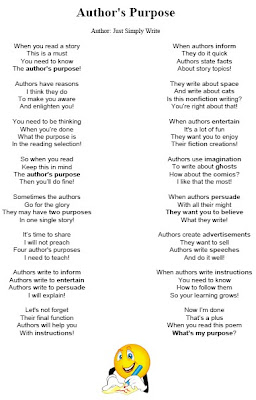 Who Are Your Go-To People? 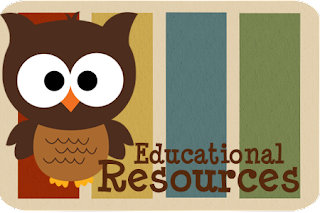 Wow! I forgot how busy the beginning of the school year can be. And to think, the first nine weeks will be over in a little more than 2 short weeks.
My beginning of the year is filled with a lot of data analysis and initial assessments to see what my new class is capable of. Then I typically begin to plan and research how I can best meet the needs of all of my students. I thought now would be a good time to talk about "go-to people." You know, the ones you always turn to when looking for ways to help with your planning.
These are my "go-to people." Their ideas and inspirations are forever present in my classroom year after year:
After several years of not teaching science at the intermediate level, I am self-contained and teaching science this year. I don't have any "go-to's" for this subject YET, but I will be sure to share once I find them.

I would LOVE to hear who your "go-to's" are!

Email ThisBlogThis!Share to TwitterShare to FacebookShare to Pinterest
Labels: GoTos

I just finished watching the movie "The Ron Clark Story," and I loved it! One of my students was kind enough to lend me the DVD for the weekend. It is a great teacher movie.

If you haven't heard of Ron Clark, he is the author of "The Essential 55." I have had this book for a while now, but could never find the time to read it. Finally, I decided to borrow the audio book from the library, so that I could listen to it on the way to and from work. One of the best ideas I've had. =) If you have never read his book (or heard it), you should go get it. For lack of a better word, the Essential 55 are "manners" for the classroom, but if you are a parent, they work there, too.

I started using some of his rules in the classroom and came up with some of my own. My students absolutely love them! The rules are manners like "Always use sir or ma'am when talking to an adult," or "Cover your mouth when you cough, sneeze or burp," or "Walk in a straight line," or "All rules apply when there is a guest teacher (substitute) in the classroom." I've had the kids do these things in the past, and would remind them of these rules whenever I needed to, but it was never a focus.

Make it a focus. When you stop and take the time to focus on these things in particular (ie., catch them being good), write them down and post them on the wall, have the kids practice...it really changes the importance of these "small" acts of kindness. These are things most kids might hear at home, but when their teacher is saying them, too, it changes things. The kids really begin to focus on doing all of these things and go out of their way to be "caught." The classroom atmosphere is better, there is more respect, they try harder with their behavior and their academics because everyone is feeling good!

One thing to keep in mind, though. You can't just go and write 55 rules on a piece of paper, go over them with the class, and expect things to change. You have to "BE" the rules, they apply to the adult as well. "Rule #55: Be the best person you can be!"

Should You Do What They Do? 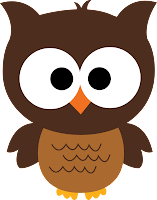 When I found out that this is what he was doing, I thought to myself, “Why?” “Why is he doing these things?” “Shouldn’t he be spending his time doing what he wants to do?” "Shouldn't he be spending more time with ME if he has all this extra time?" “Doesn’t he have lesson plans or posters or data to analyze?”

As an elementary teacher, at first glance, this was a hard concept to grasp. Especially because I knew he coached AND did the lesson plans, posters, and data analysis. “WHERE did he find the TIME?” I don’t know, but the point is that he did find the time, and it was not "extra time." It was a necessity to his coaching style. And then I thought, if Coach can do it, I can do it, too. This is now a concept I try to live by in my teaching.

It started to all make sense to me once I began. I thought, "I need to go and check this out. I need to know WHY he's doing what he's doing. I need to LEARN." Sooo, I started to do the things he was doing with his athletes, mostly volunteering to work the football games (which was a pretty big deal to me since I don't like football at all). I did what I volunteered to do, I watched what he did, I watched what the other adults did, I watched how his athletes interacted with the other adults, and I watched how his athletes interacted with him.

What did I find? The athletes were teenagers, and I expected some disrespect and "water-testing." My expectations were met. But, what I also found was that Coach was treated differently. EVERY SINGLE athlete respected him. They all answered "Yes, Sir" or "Yes, Coach" when he asked them to do something, and they didn't argue about it, even if he told them to clean the bathroom. They didn't make fun of him behind his back after he walked away. They asked him what else they could do to help when he was around. He was there "go-to guy." ALL of the athletes came up to me at some point to let me know, "I really like Coach," "You have a great husband," "I'm glad I know Coach," and (my favorite) "Coach changed my life."

Nobody told those kids that they needed to do the things that they did when it came to Coach. They did it because they wanted to or felt that it was necessary. And I thought, "Whooooaaa, I want THAT."

For me the answer was YES! In my classroom, if I assign a piece of work for the students to do, I try to do it, too, especially if it’s a project that involves writing because, in my experience, that seems to be the most UNpopular area of learning. I do not do the project once and then, the following year, use that piece as an example and let the kids do it by themselves. No. I do the project or other work EVERY TIME I assign it. I also do the project to MY ability, not theirs. We talk about this and I teach them that we have differences in ages and abilities, so I should (not can) do more. I'm working to my ability and doing the best work that I know how to do, and they are expected to do their best work, too. This idea is taken collectively to the heart, and I always get the best work, even from the most reluctant learner. To me, it’s only fair that you do what you are asking others to do, and I think that this is the idea that Coach was trying to convey to his team.

Am I saying that I do every assignment I give to the class every time? Unfortunately, no, I don’t, but I think I should try. This is my weakness in life right now, but it is also my goal. I think I SHOULD do all of the assignments I give my students.

Currently, I keep interactive notebooks with the class for social studies, and I do all long-term projects with the class no matter what subject. I also do in-class writing prompts with them and read the books I ask them to read for guided reading (unless I’ve already read them once). What do I need to work on? I need to do more math assignments, read those guided reading books even if I have read them before, and do the same homework they do. Why not? I asked them to do it. Shouldn’t I do it, too?

Those are 3 of my goals for this year: do the math, guided reading (even if I’ve already read the book before), and do the homework. Next year, I'll figure out what else I have them do and should be doing too. I have found that when I do the same assignment with the students, there is less complaining about doing the work, all of the students get it done, and, most importantly, they RESPECT me because I try very hard to show them that I am willing to do the work that they do. To them, it is fair, and that goes a long way. It's not a waste of time. It helps them to be better students, and it helps me to be a better teacher. This is the end result that the Coach taught me.